Recently, working on my new ipad app synthmate, the most interesting part has been reflecting on the progress of the app’s ui/ux and learning from what elements stayed and what elements changed from my initial design/ideas.

Wireframes or mock-ups were done using flash. I like using flash because i know it and i like the way you create objects inside other objects. I can easily switch between assets and generally work fast and am able to constantly tweak. The assets i used were grabbed off the web and screen shots of the ipad simulator. I should say i also don’t like flash for numerous reasons but i won’t go into them here. 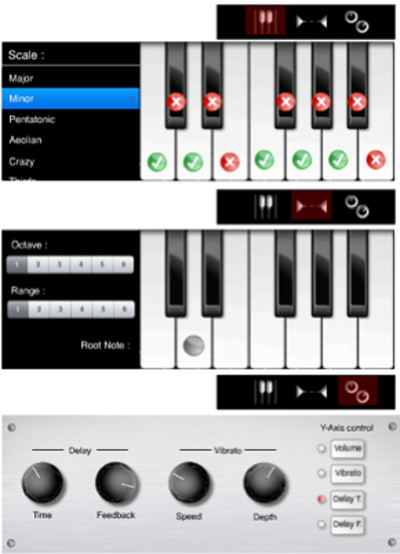 Some of the things i didn’t like about this first draft were :

I love my mock-ups. They help me see what my app is going to do. And it separates writing code and designing ui/ux. Of coarse it’s hard to separate from writing code and there are always tweaks to be made. I find having a good clear idea makes writing the code a lot more fun because it’s satisfying to achieve what you set out to achieve. WIthout a plan or a rough idea of something can also be fun, with some lovely results. But it doesn’t always work.